Welcome new interns and residents across the globe! Now is a perfect time to join our contributor community and help make acute medical knowledge open and readily available to all.

Brain injuries in the pediatric DKA patient are a significant contributor to morbidity and mortality in this population. They occur in .5%-.9% of all cases[1]. For decades it had been thought that rapid administration of IVF (a mainstay of treatment) was leading to cerebral edema and therefore was the priniciple cause of these brain injuries. Nationally, many treatment protocols were changed to reflect the belief that slower infusions might decrease the rate of this serious outcome. Even so, the occurence of clinically significant brain injury in the pediatric DKA population has not changed over time. 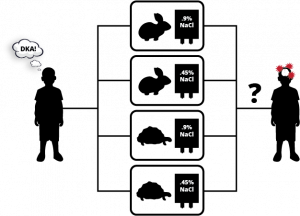 Does the rate of infusion or NaCl content (.45% or .9%) of IVF’s have an effect on neurologic outcomes in pediatric DKA?

Neither the rate nor NaCl content of the IVF has a significant effect on development of measurable adverse neurologic outcomes in pediatric DKA.

Pediatric centers may consider reassessing guideline for IVF resuscitation in DKA patients in the face of this evidence that contradicts the existing dogma.

0 to 18 years of age, 1255 children, some randomized twice during study period giving 1361 encounters for the primary analysis

Underlying disorders that affect cognition, alcohol/narcotic use, head trauma, DKA having already received substantial treatment, pregnant, condition for which treating physician wanted specific fluid and electrolyte replacement. GCS 11 or lower excluded after year 2 of study given investigators did not think it appropriate to randomize treatment for patients with exisiting signs of neurologic compromise.